How and Why the Ossoli Club of Corbin originated:

The Ossoli Club was formed at a dinner party held at the Arden Hotel in Corbin on February 8, 1938. Attending were eleven young women who elected the organizer of the group, Miss Virginia Rogers, (who later became Mrs. Charles Davis) as the first president.

Much ground work had been done before this first meeting. Miss Rogers, a teacher in the Corbin City Schools, had been ably assisted by three other young ladies, who were also teachers in the school. Those ladies were Miss Ada Gray Gilliam (later Mrs. Bruce Williams), Miss Estelle Hatfield (later Mrs. Arch Cecil), and Miss Juanita Thomas (later Mrs. George Schultz). 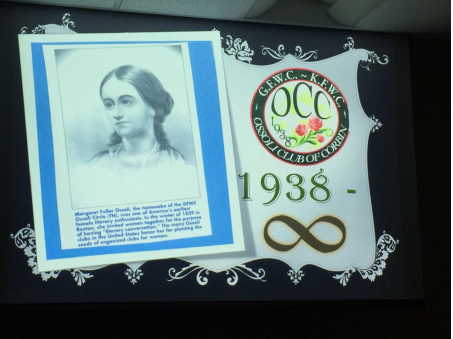 These women felt the need for self improvement, and thought by bonding together a worthwhile program could be worked out that would be a benefit to all. At first, the group was composed mostly of teachers, unmarried girls who had quiet a bit of leisure time on their hands. They hesitated to ask married women to join because they feared those women might start a family and children would be a hindrance to the work of the group. In the fall of 1939, they began inviting married women to join.

Early yearbooks show that the programs centered around cultural subjects which benefited the members and many social functions were planned, adding social graces to the benefits for members.

While the club has never lost sight of its original purpose to encourage culture among women, stimulate intellectual growth and moral development, and strengthen individual effort by organization, in the second year of its existence, community service was added to the club’s activities.

The Ossoli Club of Corbin was admitted to the Kentucky Federation of Women’s Clubs on December 30, 1938.

Who was Sarah Margaret Fuller, Marchioness of Ossoli? (Pictured above)

Sarah Margaret Fuller was a unique and dynamic women’s leader of the 19th century. Born in 1810, in Cambridgeport, Massachusetts, she died just 40 years later in 1850. She was an advocate of women’s rights, a teacher, a literary critic and a journalist at a time when women did not enjoy the opportunities and freedoms we now take for granted. Fuller contended that women have an obligation to themselves for the highest spiritual and mental development of which they are capable and that women have a contribution to make to the world as great as that of men.

She wrote Woman in the Nineteenth Century, the first women’s liberation book in the United States and her best known work. She is cited as the first female reporter in America and later became the first female foreign correspondent for the New York Tribune. While in Europe she met and married Giovanni Angelo Ossoli, an Italian marquis. She and her family perished in a shipwreck off the coast of New York when sailing to the United States to escape political unrest in Italy.

Organization of the Club

According to news clippings, early club meetings were held at the Arden Hotel, Wilbur Hotel, and members’ homes. For years, this remained similar with meetings being held often in the Wilbur Hotel, Sanders Restaurant, Jerrys, the Hungry Hound, and Yearys.

Most of the club’s meetings during the last decade have been held in the Ossoli Club of Corbin Communi- ty Room in the Corbin Public Library. Furnishings and equipment for this room were donated entirely by the OCC in 2009. Special club gatherings recently have been held at Seasons Restaurant, David’s Steak House, the Community Rooms at the Depot (now designated as the Corbin Railroad Museum), and the Corbin Center on Falls Road.

In the beginning, the number of members was limited to 20, but on Sept. 14, 1943, member limit was raised to 25, and membership was raised to 45 years later. Though 45 is the membership limit today, members years ago felt more could be accomplished by careful screening of new members, rather than adding large numbers to the fold. Recent memberships average around 30.

The name of Ossoli Club of Corbin, as well as the motto, “Get Together, Stick Together, Pull To- gether,” and the club flower, the pink rose, the club colors, green and white, were selected by the founders in 1938; these remain the same 80 years later. The same can be said of the club’s bylaws and constitution which have needed only minor changes through the years. Early club members selected Mary Stewart’s prayer as the Club Collect and it is still used to convene meetings today.

Selection of the club’s name was a difficult task. Club organizer, Virginia Rogers, had lived in Knoxville, Tennessee, where she was greatly impressed by the work of the Ossoli Circle in that city. After corresponding at length with that group, it was decided to use the name Ossoli, as founders felt it would be a distinctive name and set the club and its accomplishments apart.

Although Ossoli has often been mispronounced and mistaken for a sorority, the club has enjoyed this unusual name, for the members like to think they are an unusual group even as Sarah Margaret Fuller, Marchioness d’Ossoli, 19th Century women’s leader for whom the club was named, was an unusual woman.